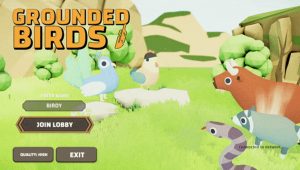 Grounded Birds is a multiplayer RPG about the tragic fate of birds – being robbed of their ability to fly, they become easy prey for other inhabitants of their world.
You join a group of brave hatchlings, as you will take a last stand to save the birds from becoming extinct. Set in a quirky and playful world, with darker influences from games like Diablo 2.
– In Development –

A Leap Forward is a Strategy game that you play from a First Person perspective. You give tasks to your exceptionally smart rabbits and they figure out the most efficient way to fulfill it. You can help out directly, or provide them with tools and buildings that increase their productivity. While you manage your village, hostile foxes will attempt to capture it and eat the population.
– Demo released August 2020 – 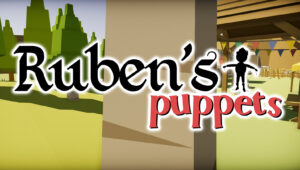 Ruben’s Puppets combines Real Time Strategy elements with Third Person Action gameplay.
Players can traverse, interact and gather within a large scale conflict that is played out by two opposing puppet factions. Your goal is to fend off the Tin puppets and free the creator of the puppet world who is being held hostage.
– Demo released in 2019 – 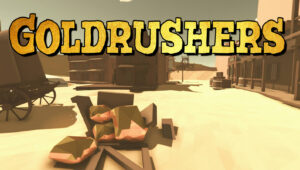 A Goldrush themed local multiplayer brawler for PC and Mac. Created in collboration with John Billingsley.
Play as two competing prospectors trying to fill your safes with precious gold nuggets or other items of value.
Whether it’s in the dusty hills of the Sierra Nevada, the icy peaks of the Klondike, or the burning heat of the desert, it’s your chance to strike it rich!
– Game released in 2018 (Steam) – 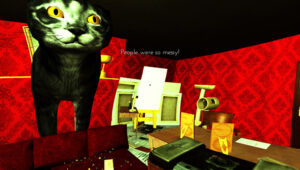 The goals of this game were to allow the player to explore an intriguing environment that they change through direct and indirect choices and interactions.
Conveying a narrative while giving the player agency was the challenge.
This project was developed in Tracy Fullerton’s “Design for Interactive Media” class at the University Of Southern California.
– Completed in 2017 – 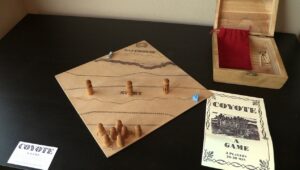 A serious game about smuggling people from South of the Border to the “Safehouse”.
Players become smugglers and help their “Braceros” to cross the border. A risky endeavour – death and the borderpatrol are omnipresent.
– Presented at Indiecade 2017 –

A Walk At Dusk 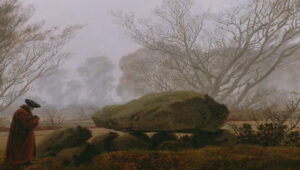 A mobile experience developed during the “GettyJam” in the Getty Museum Los Angeles.
Made in collaboration with Yiwen Dai – transformation of a painting about the divinity of nature and a meditation of mortality. References to german philosopher Schelling (Eternal cycle of life & death in nature)
– Second Place at GettyJam 2016 – 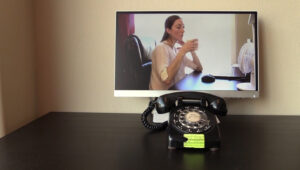 A film with a non-linear structure. Exploration of the possibilities of multiple interwoven story-threads. A rotary phone, which also appears on screen, is used as an input artifact.
– Completed in 2015 – 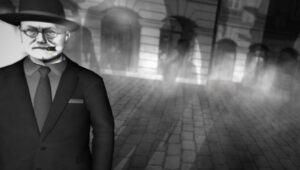 Interactive installation with a large format projection and the Kinect – interface. The visitors to the exhibition are tracked by the Kinect and are represented as avatars in a virtual environment.
Through physical movement and gestures, the visitors can interact with a space where the aesthetics of film noir and expressionist movies converge with elements of shooter games.
– Exhibited in 2015 (University Of Applied Arts Vienna) – 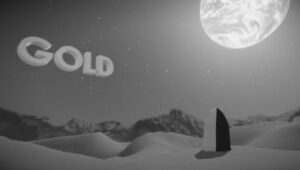 The formal elements of a silent film from 1929 are applied to a video game film from 2012. The protagonist moves in sync with the original film in a film set built in 3D.
Video game films (machinima) are highly digital films – entire film sets can be downloaded as “maps” and interacted with on one’s own computer. I transform this information onto a 16 mm black and white roll of film – code becomes a finished artistic object.
– Exhibited in 2012 (University Of Applied Arts Vienna) – 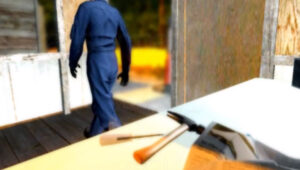 This transformation of Edward Hopper’s Gas (1940) into virtual surroundings is intended to convey the mood of Hopper’s original painting. the virtual landscape becomes a backdrop.
The anonymous character s seem downcast , abandoned and lost in their own thoughts. the interaction is ambiguous throughout and there is an overriding sense of melancholy, quiet and distance.
– Exhibited in 2011 (Y/our/space, Vienna) 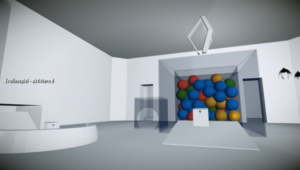 Krallenspiel, game for the “Metamart” artmarket. Interdependencies between art and money – schematised „art spheres“ can be bought and used for speculation. The exhibition space is rebuilt in 3D space. Goal – buy the golden Porsche.
– Exhibited in 2011 at METAmART (Vienna) –